This is a seriously messed up world.

Get our free mobile app

We survived Halloween without any dangerous fentanyl showing up, but now this.

According to the Jackson County Sheriff's Office and RadarOnline, a young teen girl was allegedly kidnapped in Alabama and then taken across state lines.

According to WDHN, the young girl reportedly met someone named Colby Jordan in Houston County, Alabama. Houston County, of course, is the county with it's biggest city being Dothan, Alabama.

The victim, according to the Jackson County authorities, was picked up by Jordan and later two women joined them.

These individuals then took the teenage female to an abandoned building around 1 a.m. on Saturday morning, according to WDHN.

What was the plan for this girl? Why are you taking her to a building that is completely empty in the middle of the night?

This is extremely disturbing.

After taking the girl to this abandoned facility, the male assaulted the teen girl and tied her hands and feet with duct tape, reports WDHN.

At some point, the girl ended up under a tree in Jackson County, Florida and she then escaped, according to WDHN.

The photos of the accused shows one of the suspects dressed as a vampire in a purple cape and bright purple hair and cowboy boots. 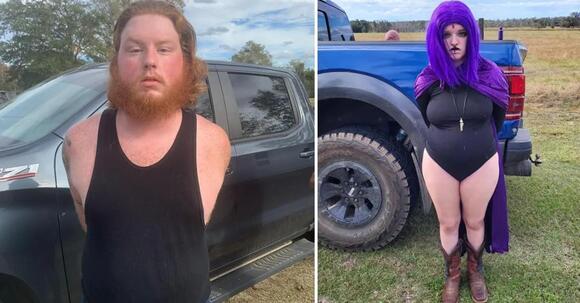 This is all extremely weird. What was the true intent before things went sideways.

We must protect our kids in Alabama and make sure they are alert to individuals like this couple.

Most Shocking Crime Stories of 2021

Tuscaloosa Restaurants and Businesses That Opened in 2022

Source: Man And A Woman Dressed As Vampire Accused Of Kidnapping Alabama Teen
Filed Under: Alabama, Alabama Crime, breaking news, Crime, Featured, Florida, kidnapping, local news, Tuscaloosa
Categories: Articles, Local News, News
Comments
Leave A Comment
Arick Evans Jr. Is Impacting The Alabama Community At A Young Age
Some Of The Most Haunted Places In Alabama May Surprise You
LSU Student Fatally Hit By Car After Alleged Rape
Scary: Did You Know About This Alabama Professor’s Murder Case?
Never Would’ve Guessed! Alabama’s Most Popular Color Revealed
This Is The Most Violent City In The State Of Alabama
Alabama Girl Escapes Child Killer By “Chewing” Her Way Out
Heroic Alabama 9-Year Old Saves Sister From Kidnapping
Tuscaloosa Man Is Carjacked By Four Armed Men With Guns